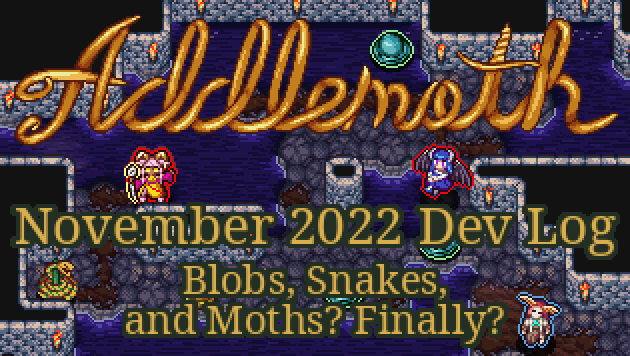 It's been.. almost a year since the demo came out! Wow! The reception to it has been near universally positive, and I have to thank everyone who tried the game out.

That being said, um. Maybe monthly updates were a bit too ambitious for this year. Apologies for that.

If you're just now coming to hear of this game: Addlemoth is a turn-based puzzle game derivative of DROD which I have been developing in my spare time. You can play the demo in your browser on itch!

Anyway, this is a development update for the full version that is in progress, we have more stuff coming together, and the project's in a very good place once there exists both time and brains to work on it.

Onto the new stuff!

Slime Blobs! I'd been trying to make these work for a while, and I finally landed on a design that I liked after... way too much iteration.

They come in small and large forms; the small ones are inert and generally harmless. The large ones, on the other hand, attack by splitting a smaller blob off and jumping into a neighboring tile, shrinking itself in the process. And if you attack them, they'll also split into two smaller blobs!

And! If they're on water, a small blob will upgrade to a large one.

As they're enchanted-type enemies, you have to deal with them either with the blade, environmental hazards, or simply by luring other enemies into them.

We've had switchable trap objects implemented for a while but I finally settled on a visual language for them. The first of which is this here golden snake statue!

The game will be using an on/off pattern for switchable objects, where they're 'on' when any switch affects them, and 'off' with no switches affect them. So this particular projectile trap type charges up when activated, and then fires in a straight line when released. Figuring out how to navigate these without getting hit is its own type of tricky, especially when navigation is needed.

This gracefully handles it when multiple switches handle an object, and you can probably imagine a few of the puzzles that will come from this!

I plan on making the switch lines that aren't currently affecting anything fade out, just haven't gotten to that yet.

This one's actually been implemented for a while, but I finally put her sprites in and started refining/tuning the mechanics for clarity and consistency. I'm very big on making sure you can understand what's happening in the scene just by looking at it, to the point where it's a core design axiom of the game.

In her current incarnation, she has really good hearing and can tell where you've stepped; but if you're further away she can only hear it if you stepped on something other than dirt. If you get too close or if it's just a shorter path, she will happily guide a homing fireball your way... Or, at least, the last place she knew where you were. She gets a little confused if she loses track of where you are, though.

By the way: explosions of any sort will destroy non-solid walls. So barrels, trees, mushrooms, etc...

I plan on adding floor indicators to show that stepping on a tile will cause an interaction; same as I've planned on doing for the hounds waking up.

This is the last NPC I'm going to actually show off, so please look forward to the rest of the game. Eventually. 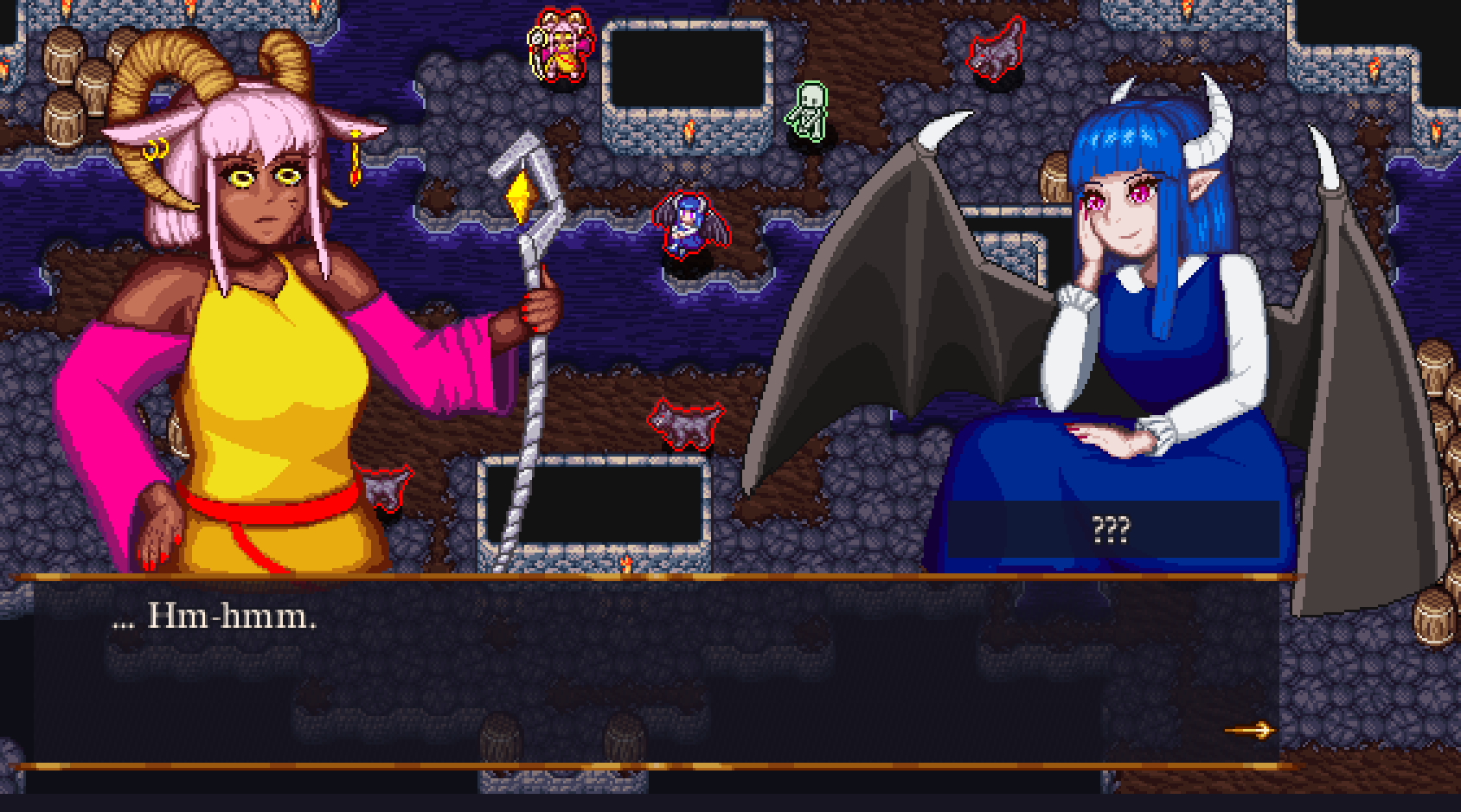 Drawing all the remaining character art has been a goal, and here's two more. Their sprites have been around a while, but now they've got faces for story dialogue, too!

There's only a couple more of them to make and they shouldn't take too much more time to finish up.

Somehow, I've improved a fair bit since the demo release, so I'll be updating the earlier portraits as well. Honestly it's kind of embarrassing looking at my older work, but at some point I do have to release instead of shaming myself for not being as good as I am on any given day.

I've been slow this year. I do apologize, a, uh, lot has been going on.

So what got done this year?

What's left to do?

This is actually going to be fairly difficult to write periodic updates about. I have no intention of halting development, and have been itching to work on this almost daily. Making games is just hard work, especially when there are 8 million other things going on simultaneously.

We're in a good place though: Mechanically we're almost done, sprites are in good shape, tilesets are mostly done. Future progress will be focusing on putting together the story and placing a large number of puzzles in place. Many of the puzzles have already been made, too, just need to slot them in appropriately!

Next major step will likely be building a crude version of the entire game and then fill in the blanks.

Thank you for your patience!