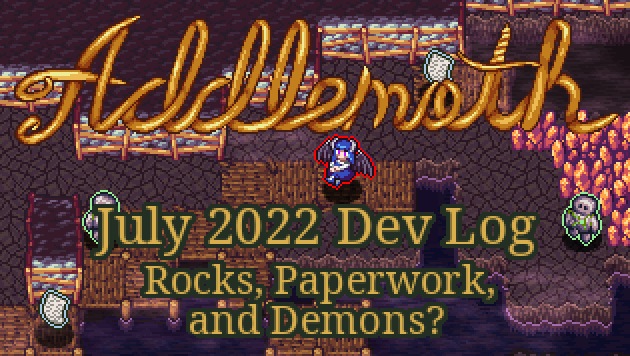 So, time for June's update! And May's. And also April's, because I skipped a couple months. I've been kept very busy with life due to, uh, a lot of things going on both personally and with work. Rest assured I'm committed to seeing this through, time and available Brain Points have just been at a premium. Sincerest apologies for that, things should be letting up though.

Previously, in the March update, I covered how I made the tilesets used in the game. Check it out if that sounds interesting!

What's been going on? Well... Honestly, a lot of stuff that doesn't make for great screenshot material. Organizational work is important!

As stated previously, one of my goals was to have a design for every mechanic in the full game, start to finish. This is now complete!

... With, according to Google Docs, a 40 page document. Said document contains a listing of every entity in the game, its mechanical design, potential puzzles based off of it, and notes on how I came to this design and why I chose it over the other options. It has been immensely helpful to figure out what I'm missing, what would be interesting, synergies I hadn't thought of before, and synergies that I wanted to make reality.

This is a bit overkill, yes, but I was struggling to make sense of everything in the game and keep it within scope. Making this is a big step towards actually finishing it!

But also, now I have a concrete roadmap for everything that remains! There will be approximately 35-ish elements in the final game. For comparison's sake, the demo had only 7: Player, Blade, Hound, Skeleton, Lich, Spawner, Logs.

Speaking of the golem enemy, they're basically finalized now. Since they move every other turn, I decided that, for clarity's sake, I should have a different pose when they will move next turn. Still needs a little bit of work, but happy with how it communicates to the player. The full list of behavior is in the document screenshot above, if you want to read it in detail.

I also decided to change the way the popup walls work. Previously, if they were brought up while a crushable entity was on top of them, they would 'crush' it. That isn't true anymore, and anything that is standing on top of them holds it down. I'd gone back and forth on this one for a while now, and decided that it was probably confusing enough without making it have finicky timing rules on when things get defeated.

That makes the walls have the same behavior as the ones in Bean and Nothingness, which is a puzzle game you should look at, if you haven't already!

... Some day I'll find the time to finish playing through it...

Of course, an idle animation is coming too. Just have to filter it out to all 8 poses...

Way back when, one of the original motivations for this project was using it as a way of improving at pixel art, and I figured that doing 8 poses of every character in the game would help me at that. It did, but, well, sometimes I look at the workload, and I'm filled with a twinge of regret.

Gonna do it anyway though.

I'd gone back and forth for a while on temporary, one-way paths. The popup wall above covers some of it, so I wanted to have a variant that is time restricted in a different way. While writing the mechanics documented, I wrote down a few variants and compared how they would work as puzzle elements, before settling on this.

They also function as switch blockers, as switch lines can't progress beyond them. I haven't quite fixed the code side to reflect that visually, though.

Anyway, I'm hoping to be a bit more active again in the future, it's genuinely been a difficult few months and I've been more absent basically everywhere for it.

Thank you very much for your patience.

I can feel the passion in every animation. It's always a pleasure to see news from this project!

Thank you! Will keep plugging away at it when I can.