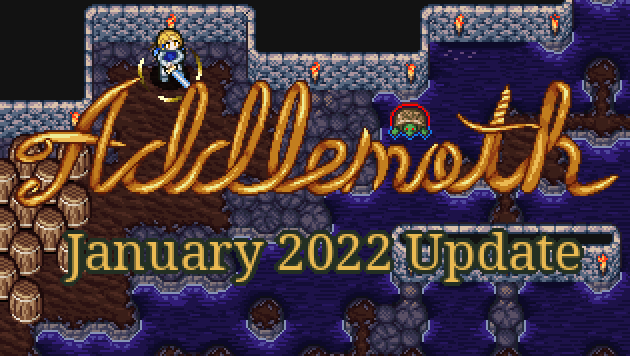 It's been a bit over two months since the demo's initial release! I'm really floored by the positive feedback I've received for the game and would like to thank everyone who played it. It really means a lot to me!

I took December off because I had needed a break after everything I did to push it over the finish line. Maybe releasing it after Thanksgiving wasn't the best of ideas, but, well, that's when the game was done. Once January rolled around I started getting back to work on the full version of the game.

It's time to do an update about my work for the past month! This does not apply to demo content, it's simply work on the full version, so feel free to pass if you don't care that much about it.

Please bear in mind I'm doing this in my spare time and it is likely going to take a year or more to get the rest done.

So, current development focus is twofold:

So as the game goes on there will be more of a focus on switches and traps, in addition to the more mobile enemies. As a design goal, I want to make sure that everything you can interact with can have its state determined entirely visually, no guesswork or hidden information needed, so the effect of switches will be spatially aligned.

I thought about it for a while, but I've decided that the only type of floor switches in the game will be pressure plates; stepping on them activates, stepping off releases.. There's a few reasons for this, but primarily it's that it is the easiest to understand and visually comprehend. Single-press effects can potentially make more interesting puzzles, but it hurts to visually follow.

And to finalize the design of switches, one of the things I felt like I needed to do was add support for multi-tile objects, which are single objects that take up an arbitrary number of tiles. This took about a week of work, but I think will pay a lot of long-term dividends as it can be used not just for the popup walls you see above, but also for other objects, like enemies, that are 2x2 or other sizes. 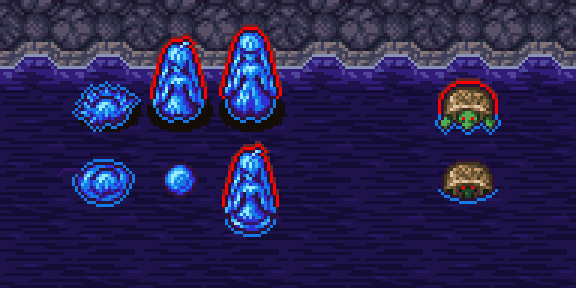 I wanted to add a number of water-based elements to some of the mid-game puzzles, and some iteration ended up with these mockups for a turtle and a water elemental. These are still to be considered WIP and prone to touchups/changes.

Art is WIP and not final! Turtles, in their current design: Move every other turn, hide when hit or parried, can be pushed one tile away.

If they're hiding in water, you can walk on them as a bridge! They'll still wake up in three turns, though.

One of the core design goals of this game is No Sokoban. This is a game where you do not push blocks: the 'blocks' push you, so I had to mull over the design of being able to push the shell for a bit before deciding on this. I'm okay with limited amounts of pushing (see: the logs in chapter 3), but I don't want it to become the focus of the game.

I'm regretting stage 3-4 in the demo as it is right now anyway...

The Water Elementals are still kind of too unfinished to show, I have some mockups in code but nothing quite as finalized yet. 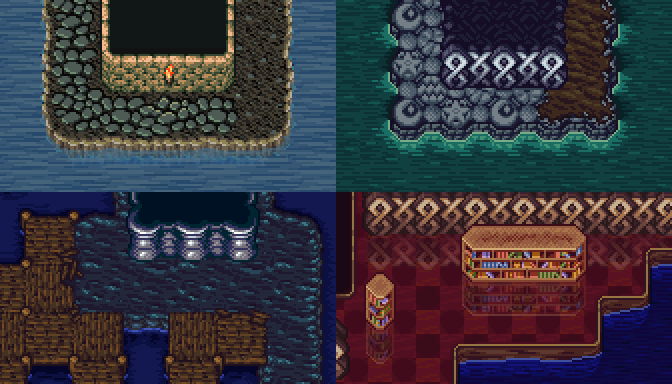 And last but not least, mockups or WIP of tilesets that will go into the game in the future! None of these are final, and are prone to further edits, tweaks, changes etc as I get them into the game.

And for those who missed it in the last patch update, here's an animation from an upcoming NPC. Who is she? What does she do? Well, some day people will get to find out!

Again, big thank you to everyone who played the game, even if you bounced off it I appreciate just giving it a fair shake. It means a lot to me.

I work on this game in my spare time, and it's highly likely that my day-to-day life will be getting busier in the near future, so I don't know how the next few months are going to go for updates. If I go silent, well, don't be too surprised! I'll probably be yabbering away on Twitter anyway, so feel free to follow me @mauvecow over there.

If you're just tuning in to this dev post and the game seems interesting, check it out at: Addlemoth on itch.io!

Wow I love that mechanic for the switches! Very cool stuff, thank you for sharing progress!